Out and about with Kuranda Wild… an online seasonal nature diary 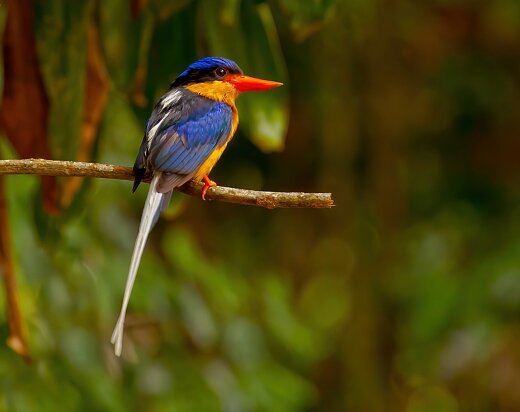 First time visitors to Kuranda are often stunned by the surrounds they find themselves in. Waterfalls, dramatic gorges, forests so green it almost hurts the eyes, and a wealth of wildlife combine to dazzle the visitor. No wonder so many choose to return again and again.

Some animals make visiting Kuranda a part of their yearly routine.

At this time of the year, families and bushwalkers enjoying some of the forest trails around the village, or even those driving slowly along the tree-lined roads, may notice a streak of blue with two pure white streamers attached flying across the path in front.

Lucky them. The Buff-breasted Paradise Kingfishers (“Buffies”) are back! These little birds have flown all the way from New Guinea, where they spent our “winter”, back down here to show off to one another and breed.

They are unmistakable, with a royal blue back, apricot belly, scarlet beak and pure white tail streamers, carried by both sexes but longest in the males.

Many kingfishers nest in a way that is best described as insane. They fly hard and fast at a rock-hard termite mound and slam into it headfirst with their beak. Hopefully, they have chiselled out a piece of the mound. Undaunted, and apparently not immediately killed from the impact, (which CAN happen), they will continue until they have excavated a tunnel deep into the mound. The security provided means that these nesting tunnels can be seen on mounds on the forest floor, very close to the ground. Look for the tell-tale holes!

The birds are at their showiest and best just after they have arrived. Their plumes are still immaculate. As the season progresses, the tail plumes tend to get bedraggled and dirtier as a result of being knocked about and crammed into a small, muddy nest.

Although colourful, buffies are hard to see, sitting quietly in the shadiest parts of the trees, keeping an eye out for any careless insects or small lizards.  Makes the surprise of discovery all the more worthwhile; doesn’t it? Rainforests are ancient ecosystems. The stability of the environment – constant warmth and abundant moisture - encourages opportunities for evolution to experiment.

Some of these ancient life forms are still with us. The world’s oldest flowering plants still grow in the hot lowland forests. Giant insects flit and forage, as their ancestors did millions of years ago. There is one remarkable minibeast that has seen them come and go.

To find it, you must go out into the forest either during, or just after, rain, at night. Keep your headlamp, and your eyes, focused on the mossy, rotting, logs that form a conspicuous part of the forest floor. Their decomposition recycles vital nutrients through the endless cycle of decay and rebirth.

If you are lucky you may notice a small creature, about 35 millimetres long, moving about in a determined and preoccupied manner

Velvet worms don't have hard exoskeletons like arthropods. Instead, their fluid-filled body cavities are covered in a thin skin and kept rigid by their pressurized internal liquids. They move by the alteration of fluid pressure in the limbs as they extend and contract along the body.

Fossilized marine versions of velvet worms have been found in Canada (505 million years old) and in China (520 million years old). Velvet worms are now considered to be close relatives of arthropods and tardigrades (an amazing group of animals which deserve a show of their own!). They're interesting because they provide an idea of what the ancestors of arthropods were like.

Velvet worms are ambush predators, hunting other small invertebrates by night. To subdue their prey, they squirt a sticky, quick-hardening slime from a pair of glands on their heads. After the prey is ensnared, the velvet worm bites into it, injecting digestive saliva that helps liquefy the insides for easier snacking. 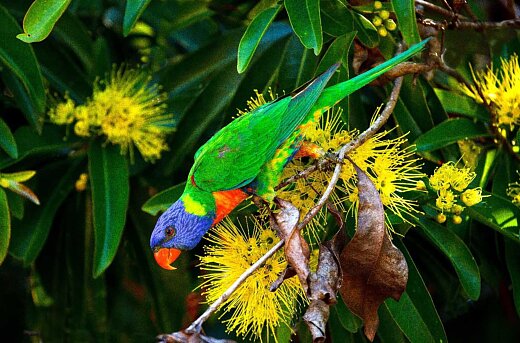 Listen to that racket!! What are those birds doing??!!

There’s nothing like a drink or two to get the party started! Rain, warmth and sunshine are a potent combination, and many rainforest trees and shrubs are now in full flower. Some open at night and are small and inconspicuous. They are pollinated by bats and insects, which locate them by smell.

Others, those we are most familiar with, are brightly coloured and are open in the day. Bring on the birds and the bees (did your mum and dad tell you about them?) and their sharp eyes!

Nectar, contained in the flowers, is full of sugar and delivers an almost instant energy hit to those creatures using it. Rainbow Lorikeets are the classic example here in Kuranda. Gaudy and raucous, they are always on the move, constantly chattering, squabbling and looking around to see if anyone else has it better than they do!

Despite their bright colours they can be surprisingly hard to see in the treetops- you almost always hear them before you see them.

Birds harvest nectar in two ways. Some, like honeyeaters, have a long, thin tubular beak which can probe the flower and lick up the sugars. Others, like lorikeets, have a brushy tongue that collects nectar and pollen dislodged by the bird’s constant and vigorous exploration of the flowers. Destructive but effective.

Rainbow Lorikeets are very successful and familiar birds. There are two very similar species- one across the north – the other extending all the way down the East coast and around to Adelaide. They were never seen down there 30 years ago…why now?

Lorikeets benefit from the increased abundance of flowers in urban areas, and their numbers are often higher in the leafy suburbs than in bushland. This suggests that the more we urbanise an area without leaving substantial native vegetation, the less bird diversity we will have – and the more our urban areas will come to be dominated by those few species that are hardy, clever or adaptable enough to adapt and survive. 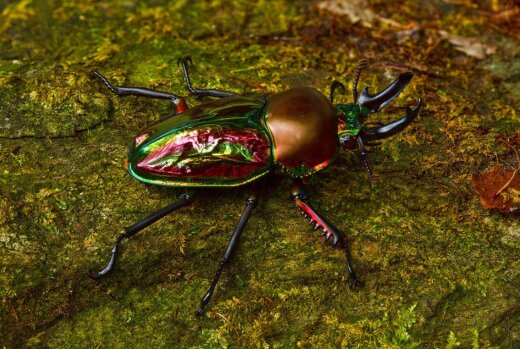 “Rain, rain, coming down on the cane”

Some of the lyrics of a local song hint at the level of rain this region receives. Kuranda is right up there, averaging over two meters annually. Sometimes we can do much better than that!

With the rain comes the wildlife - especially bugs.

Good bugs, bad bugs, big bugs, tiny bugs, welcome bugs, annoying bugs, ugly bugs and beautiful bugs. One of the most stunning bugs in the entire world is active now and Kuranda is one of the few places on earth where you might, if you are lucky, actually see one.

Rainbow Stag Beetles personify the overused expression “living jewel”. Widely considered one of the most beautiful insects on earth, they have spent three years as considerably less attractive larvae and pupae, maturing slowly - deep in the moist, rotting timber on the forest floor. The adult form is spectacular, especially big males (up to 70mm long), with their huge horns out front. These “antlers” have but one function - to intimidate and defeat rival males.

They are not alone. There are beetles everywhere. Conservative estimates for worldwide species state 400,000 species – over eight times as many kinds as there are fish, amphibian, reptile, bird and mammal species put together. Nobody really knows. The eminent biologist J.S. Haldane probably put it best when he remarked “... the creator, if he exists, must have an inordinate fondness for beetles.”

It used to be thought that rainbow stags were seldom seen because they only utilised rotting Red Cedar, a tree which, because of its considerable economic value, was heavily harvested and is now scarce. Research indicates that they are more generalist in their feeding habits and are probably more common than first thought. Adults will feed on flowers and ripe fruit and can live a long time for a beetle – sometimes as much as a year. They will come to lights, but not dependably, and even then, those that do are mainly females.

Rainbow stags are bred in Asia and Europe for the live pet trade and as mounted specimens. Prices and demand reflect their rarity. Hard core beetle breeders have even bred them in in different colours, like budgies. As far as your correspondent is concerned – nothing beats the original!

Facebook tag Rainbow Stag Beetles personify the overused expression “living jewel”.  They are rightly considered one of the most beautiful insects on earth,